Polyglyceryl Oleate is a PEG-free water-in-oil (w/o) emulsifier and an ester of oleic acid and polyglycerin-4. It’s said to be an excellent emulsifier used to produce creams with very good hot and cold stability. It has an HLB of 5.

You may also see it listed as “Oleic Acid Polyglyceride” or “Tetraglyceryl MonoOleate”. You may also know it as “Durosoft PG4-O” (who manufactures their version in England).

Polyglyceryl Oleate is a water in oil (w/o) emulsifier meant to create emulsions where the oil (lipids) is the external phase and the water (aqueous) is the internal phase. But what does that mean tho?! LOL!

It means the water droplets are suspended in oil. When you see something like “w/o”, think “internal/external”. Meaning, water is the internal (inside) phase and oil is the external (outside) phase.

Check out this diagram from molecularrecipes.com for a visual: 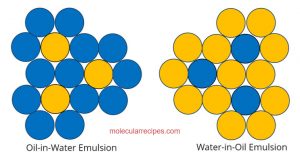 (blue is water, yellow is oils/lipids)

Polyglyceryl Oleate, being a w/o emulsifier, may create emulsions that feel more protective and substantive on the skin in comparison to emulsions made with o/w emulsifiers like Olivem 1000. You can certainly use it as a co-emulsifier while making regular oil-in-water (o/w) conditioners, lotions and creams.

Polyglyceryl Oleate is thought to be “cold processable”. That usually means you can use it to make room temperature emulsions if none of your other ingredients need to be melted. It comes in a liquid form and can be added “as is” (meaning you don’t have to heat it).

I purchased this ingredient from makingcosmetics.com and there are no instructions about adding it to either phase before heating. It literally says “Can be added to formulas as is”.

It’s said to be used for a number of benefits including but not limited to the following: