Montanov L needs a separate thickening agent to get a good thick cream.  2% Cetyl alcohol was added.  I also specifically added Kokum butter instead of shea butter in an attempt at a small bulk up.

The white rub in (soaping) was outrageous. lol! I mean, there wasn’t a little that was inconvenient.  It was full on white that needed to be rubbed in well before it disappeared.

In the formula, there is no Caprylic/Capric Triglyceride, no low HLB emulsifier, and no anionic emulsifier. All this along with the Xanthan gum in the water phase… made the mix feel…meh.  Although, it didn’t really feel draggy either according to my notes.

And again, there was this ever so slight irritation or sensitivity every where I put it on the skin. At this point, I noticed a clear correlation between the inclusion of Sodium Gluconate and the slight irritating sensation on my skin.  I’m not saying you will be sensitive to Sodium Gluconate.  I’m just saying that apparently I am.

In hindsight, I noticed I was running away from the fatty alcohols because I didn’t want any waxy feeling on the skin.  I’d later come to understand that they are simply the best and cheapest ingredients to use to create thick creams…as long as you use them in moderation.

I think sometimes when you’re working on something, you can get lost in the weeds of whatever you’re trying to do.  That’s definitely what happened with Version 10.  In my notes, I gave it a D. 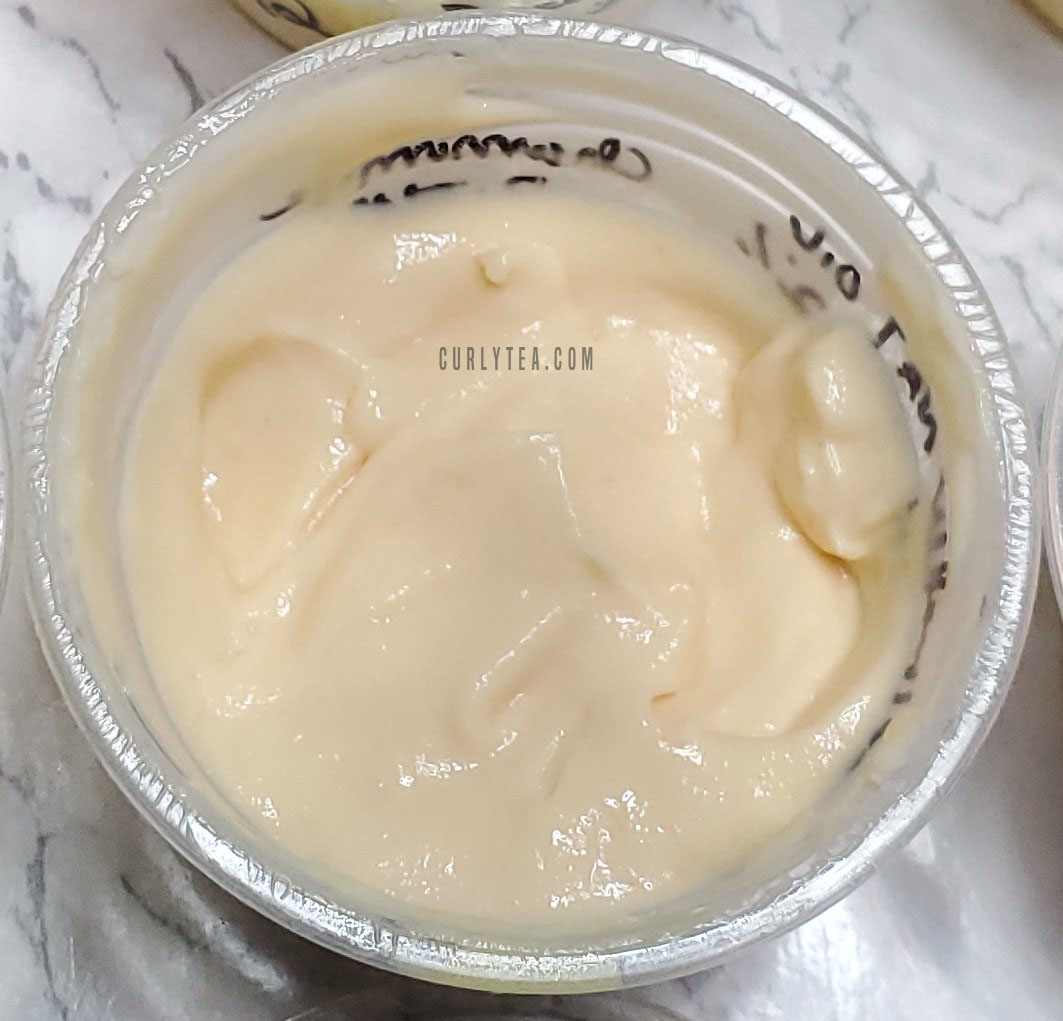 I have this formula rated as a solid B in my notes.

Version 11 saw the reintroduction of Biochelate as the chelating agent along with the RE-introduction of the non-problematic Creammaker Moringa o/w nonionic waxy emulsifier.  Here, when I say “waxy”, I don’t mean that it feels waxy on the skin.  I just mean that it’s not a liquid or a powder.

In case I didn’t mention it before, Creammaker Moringa has the benefit of adding little to no white rub in (soaping) to an emulsion.  That’s definitely what I wanted to get rid of.   The RE-introduction of the anionic polymer emulsifier Gelmaker NAT was also an attempt to get rid of any harsh white rub in.  It also has a quick-breaking feature.

At this point, I’m outright refusing to put any version of Xanthan gum I have into the water phase.  I ain’t doing it.  It makes the mix feel worse in my opinion.

In my notes, I wrote “I could’ve skipped the kokum butter”.  I don’t remember it adding anything to the viscosity at such a low percentage.  The viscosity was one of a thin cream; thickener than a lotion but not nearly what I’m looking for. 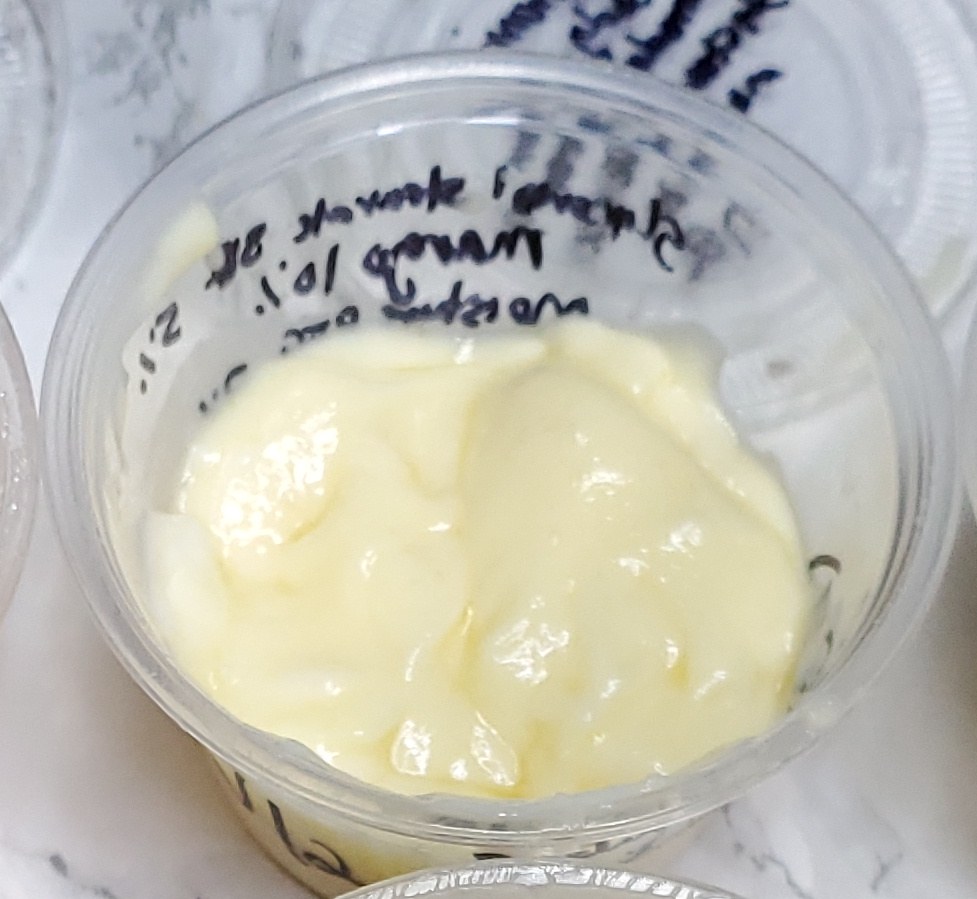 There was separation.  It didn’t completely separate but it started to separate.
Any separation gets an F, of course.

Up until this point, I had always focused on making oil-in-water (o/w) emulsions.  So why not try a water-in-oil emulsion?  Maybe it would actually feel better on my skin and give me a better “butter” feel.

When making w/o emulsions and combining the Phase A and Phase B, add the water much slower than usual.  Mix well between each addition.  I knew to do that, but none of it matters if you don’t have a high enough percent of the w/o emulsifiers (or a combination of w/o emulsifiers) to handle the amount of your oil phase.

There was separation in version 12 of the chamomile body butter.  It didn’t completely separate but it started to separate.  Any separation gets an F, of course.

It may have had something to do with the fact I left the chelator in the formula when I was reworking it for a w/o mix.  I read somewhere, I think it was Prospector, that chelators in w/o emulsions are a no-no. (4) If that’s my misinterpretation, forgive me.

On day one, according to my notes, it was more of a cream than a butter like consistency.  I also had to keep mixing until the emulsion cooled below 40℃.  I wrote down “feels pretty good on the skin. much better than previous (before version 11 attempts)”.  That just means I like the skin feel of this version better than any of the versions I made before Version 11.

This w/o emulsion actually felt pretty good on the skin.  Because of the w/o nature, it didn’t immediately absorb which gave it a nice coating (not waxy) feeling.  I don’t know if that’s the Moisture REG being used with the w/o emulsion or not.

TIP: Speaking of w/o emulsions, add low amounts of swellable or soluble polymers to the WATER phase of a w/o emulsion instead of the oil phase.  It can “improve their freeze/thaw stability” according to Prospector.

Anyway, this recipe began to separate.  And thinking about it now, I’m not sure if the fragrance oil I used in this version is what tipped the instability over the edge.  I’d later have the same issue using the same fragrance oil in another version of this recipe.

I’ve used Glyceryl Stearate SE before in other recipes long before now.  It usually does a bang up job without too many issues, especially if I use two additional w/o emulsifiers to help it along.  Maybe that 3rd emulsifier was sorely missed in Version 12’s formula.

Will this be the end of the chamomile body butter clownery?!  Spoiler alert: 🤡

Stay tuned for Part 4 of the Chamomile Body Butter Misadventures

4 Chelators in w/o emulsions  – Prospector 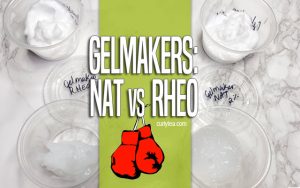 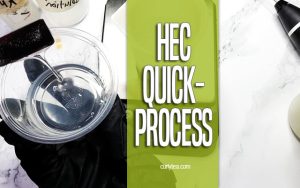