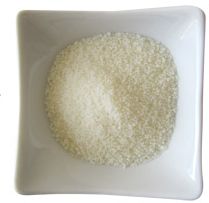 Cera Bellina is a hydrophilic derivative of natural beeswax in which the free fatty acids have been converted to polyglycerols esters. Elimination of the free fatty acid functionalities in beeswax improves the oil gelling and oil retention capability.

With Cera Bellina, all natural plant and vegetable oils can  be gelled with relatively low wax concentrations. Smooth, soft gels with a satin-like feel on the skin are the result.

Products formulated with Cera Bellina and natural as well as synthetic oils produce remarkably stable, smooth gels. This property is also beneficial in emulsion products, where its hydrophylic properties enable it to act as a coemulsifier and its rheology modifing properties lend increased formulation stability.

(Photos from the translated version of Aroma Zone.

Cera Bellina has the unique ability to give stability by forming non-granular gels of liquid oils. Besides the consistency regulating properties of beeswax, it has the remarkable capability of inhibiting crystallization in the oil phase and therefore enhancing stability by preventing the formation of granules.  This attribute can eliminate the graininess or rice granule effect that can occur when using shea and other natural butters in anhydrous formulations such as lip balms and lotion bars.